Elaine and Francesca look forward to Easter and the chance for New Beginnings.

Elaine: The first short story I had published, almost two years ago to the day, was called New Beginnings and it certainly was for me.

I attended a writing class for six months, mainly because I wanted to write a novel, but was also encouraged to write short stories as well. I didn’t have a clue where to start or if I could write a story that was only two thousand words long. I wrote a couple but never sent them off. 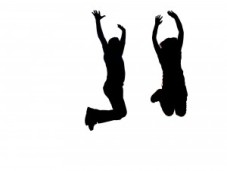 To be honest, I couldn’t believe anyone would want to buy a story I had written, but I was wrong. The day the e-mail came from the magazine, saying they wanted to buy my story, is a day that will stick in my memory forever. I was alone in the house when it arrived. I read the three-line e-mail several times before it sunk in. Someone did want to buy my story. I ran up and down my front room, cheering and waving my hands in the air. Anyone passing my front room window would have thought I was a lunatic. My heart was pounding. Taking a deep breath, I dialed my husband’s work number but he was in a meeting. I tried ringing my son but he didn’t answer his phone. I rung my daughter and she was unlucky enough to be the person that answered. It has to be said that she didn’t understand a word I was saying.

My story was a about an elderly lady who had lost her husband five years earlier. 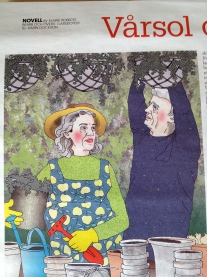 The garden had become neglected and it was something they had cared for together, but the time had come for her to get her life back on track. What is surprising is I originally wanted to write a story around visiting a garden centre, but actually that was how it ended.

That story was truly a new beginning for me as my published short stories are now in double figures. My love will always be my novels and I have completed three now, two of which will probably never see the light of day, but the third, a modern romance, has potential. I’m now writing my fourth, which is a historical saga. This is a totally new adventure for me or possibly another new beginning.

Francesca: Like Elaine, I’ve had a story published called New Beginnings, though they changed the title to A New

Beginning. It was the second story I had published and, in itself, could be said to be part of a new beginning for me, as a published writer.

The story was about a woman who ended up doing the same things for her local community and with her family every Easter, things they always expected her to do, but never anything she really wanted to do. It’s about how she breaks out of the rut and asserts herself. The tale was based on my own experience, though exaggerated for literary effect.

Spring is my favourite season and I particularly love April and May, with its blossom and bright, bourgeoning leaves, the fluffy chicks, downy ducklings and cute little lambs. There is the promise of lighter evenings and the weather’s gradually getting warmer, but not as hot and muggy as in the summer. 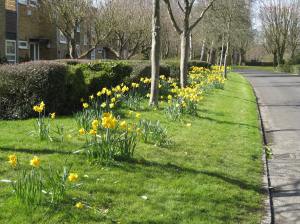 ‘A host of golden daffodils’. Taken today, just down the road from where I live.

This week I’ve seen at least four bumble bees, their fat, furry bodies buzzing round the nascent flowers. Earlier today I even saw a butterfly, a clouded yellow, on my way for a walk in the nearby meadow. Soon that will be exploding with the colour of its myriad wild flowers.

Lighter days, brighter colours, warmer weather: what’s not to like? I always feel better this time of the year, after the long, dragging winter. It seems to kick start my body and I get more done. Kind of like, well, a new beginning!