Francesca and Elaine think back to something they’ve each had a hankering to do.

Francesca: I long had a yearning to restore or convert a house. You know the sort of thing, a run down farmhouse or a Georgian residence by the sea that’s seen better days.

My husband, despite being a structural engineer, has never had the same urge. He would rather build one from scratch. Maybe its because he’s seen the problems restoring old buildings can bring.

In Littlehampton, when I was a young child, I recall there being three or four large Art Deco houses overlooking the east side of the beach. We used to pass them on the bus. They were clearly empty and run down, though I’ve no idea why. They were beautiful houses. How I longed to own one and restore it to its former glory. They were eventually pulled down and I think there are ugly flats there now.

I still have dreams that I’ve discovered new rooms in my house (which never looks like the house I’m living in), like two extra bedrooms or a huge secret living area. This is much better than a similar recurring dream of mine, one where I’ve moved and wish as soon as I get there that I hadn’t!

Would I still like to convert or restore a house though? Probably not. TV shows like Grand Designs, where people suffer stress, angry neighbours, trouble with planning permission and unrealistic budgets is enough to put the hardiest enthusiast off. No, the nearest I’m ever likely to get now is designing a house for one of my characters!

Elaine: The romantic notion of roses growing around the front door and a lovely garden gate at the end of a footpath has always been something I aspired to. Not ever having a garden gate, not in the traditional sense, I always imagined one day living in a character cottage in a small village.

Spending the last few years staying in numerous villages for long weekends, I have to say 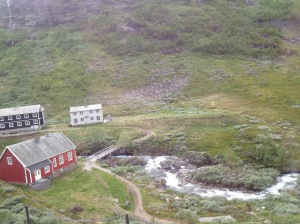 my magical bubble has burst, but it wasn’t so much a loud pop, more of a little fizz.

There is no doubt the villages I have stayed in have all been lovely, and great for writing, but some have had no street lighting or pavements to walk along. Being the type of person that jumps at her own shadow, I could never come home after dark by myself. However, it has made me realise I’m a townie. Where I live is not the best place in the world, but living forty minutes from London has its advantages, with the many theatres and museums. Equally, I’m probably a similar time from the coast. I’m also ten minutes away from one of the biggest shopping centres in Europe. There are also excellent transport links close by.

While not trying village life, and trust me I’m not knocking it, I have accepted that I am very well placed for everything I need. As I’ve got older, my dream of village life has slowly fizzed away without me noticing, but I will continue to visit the beautiful British countryside and enjoy my time there, knowing I will soon be home and enjoying all that it has to offer.

What have you always thought you wanted, but then…?