Elaine Roberts talks about how a whole new world opened up when she decided to write her novel.

My writing is never far from my thoughts. Thank goodness typewriters are a thing of the past, I hate to think how much Tippex and re-writing would be involved. My laptop goes practically everywhere I do. My husband and I recently drove to North Wales to visit an elderly aunt and I even tried to write in the car, but travel sickness took over. A week later, I took it to Worcester when visiting more relatives. I don’t like to miss an opportunity to move my work on a stage. To be honest, I think I’m a little obsessive. As soon as people know I’m writing, I’m constantly being asked when my “best seller” will be published.

If only life was as simple as that.

I was asked recently how I manage to write enough to produce a novel when working full time and that is a problem, especially as my job requires me to use the logical side of my brain and my writing needs me to exercise my creative muscle. I am lucky to have a very supportive family and a husband who has relieved me of any household duties, which obviously gives me a very precious commodity, time.

My time used to be spent writing short stories for women’s magazines and while it wasn’t something I ever wanted to do, it was a quick win and helped keep my belief that I was a good writer. Time wasn’t an issue either because I could write a short story in a couple of hours, then I would let it sit for a while and then return to edit it. However, it is a totally different skill, as some writers will admit they struggle writing within a strict word count and vice versa. For me it’s working an apprenticeship. If I learnt to play the piano, that wouldn’t make me a concert pianist or maybe more appropriately, a GCSE in history doesn’t make anyone a historian. 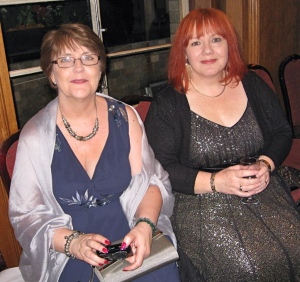 Francesca and I At An RNA Event

Anyway, before I start ranting, back to the writing. It is underestimated how much work is involved in writing a novel. When you first start writing seriously, you hear phrases like: show don’t tell, the five senses, ensure that your plot, characters and your sub plots all work. Then of course there is the issue of avoiding the saggy middle, haha, that’s a bit late for me. Seriously, the saggy middle is all about making sure something happens halfway through your story, to carry your reader on, so they don’t put it down and never pick it up again.

It’s simple, if only.

I plan my chapters and the structure of my novels and that makes it easier to pick up and put down. 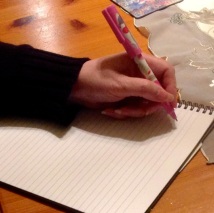 When I begin writing, it’s always difficult to know exactly where to start, so my first chapter usually gets rewritten about a dozen times, and then I also have a habit of changing the order of my chapters. This causes another problem because I then have to check if moving a chapter has a ripple effect to something I have already written. I once had a character discussing an argument that hadn’t happened because of such a move. It’s all about the attention to detail.

What I’ve discovered with my new work in progress is that I write in layers; that wasn’t planned, it just happened. I think that is because I’m trying something new and it is much more complicated than anything I have ever written before.

So the next person that says to me “I could write a book, I just don’t have the time,” I say go for it, even if it takes years. As with all work, until you’ve worked in somebody else’s shoes, you have no idea what’s involved.

Now where was I?

Once upon a time there was a….