Elaine Roberts talks about how she hopes to make the year ahead count.

Christmas and New Year have come and gone and I have decided I am going to make 2016 work for me. Due to a rather hectic latter part of 2015 and bad health, I haven’t written any serious amount of words since about September.

If you have read the New Year blog, where I set out my goals for the year, you’ll know I want to finish my saga and get it sent out to agents/publishers. However, until I finish work at the end of March, my writing time is extremely limited, but that doesn’t mean I do nothing.

I’m very lucky to belong to The Romantic Novelists Association New Writers Scheme (RNA NWS) so I read my report again. The critique is part of the RNA NWS membership and is worth its weight in gold. The writer of the report gave me some valuable direction but I didn’t know where to begin. I had written over 53,000 words and had lost touch with my story. I was stuck.

As Julie Andrews once famously sung, let’s start at the very beginning, so I did. I returned to basics.

Starting with the three-act structure, I looked at my story to see how it fitted. I’m pleased to say that overall, it wasn’t too bad. A scene I had in the first half should be in the second half of the story. I had gaps as well, so going back to the beginning helped kick start my imagination and deliver some ideas. Some will be used, some won’t, but they have all been written down.

I have also watched some documentaries that are relevant for the time period I’m writing in, this has also given me ideas. The research has continued and the reader of my manuscript gave me a few things to think about. Some of those things meant changing the order of the story and raised the question prologue or no prologue. 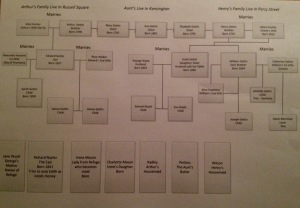 I also have plans to go to many writing events. I am attending two conferences, which involves listening to established authors, agents and publishers as well as actively participating in workshops. Once I have given up work, I intend to become a regular attendee at the London Chapter meetings. I also have writing retreats planned.

Currently, I am placing my building blocks where they need to be, so come the 1st April, I know exactly what I need to do to finish my story.

When I look at my diary for the year ahead, I wonder how I would have managed to find time to go to work, oh but I won’t have to anymore, lucky me!

6 thoughts on “A Very Good Place To Start…”