As the new term gets started, Elaine and Francesca think about their writing year ahead.

September and the new school year is upon us. For some it is a momentous occasion, with children going into the next level of education. Whether their son/daughter has gone from nursery to reception or from sixth form to university, or anything in between, many tears have flowed.

Just as it’s a new beginning for the children/grandchildren, so it is for the writers amongst us. It’s a challenge, getting back into the swing of sitting still long enough to write some words, after the hustle and bustle of the summer holidays.

Elaine: Earlier this month I attended the Historical Novel Society Conference and a Woman’s Weekly workshop on historical writing. Although they were obviously very different, both were a first for me. I gained something from both of them but what astounded me more is that I know more than I realised; it is clearly about putting that knowledge into practice.

My Victorian Saga is technically finished and out trying to get snapped up, although I am sure changes will need to be made. While I am waiting for those decisions, I am planning my next novel. That means I am up to my neck in research, learning some fascinating facts that I hope I can slip into my novel. It’s pretty safe to say there have been times when I thought my head would explode.

I have paper and Post It Notes everywhere. Luckily for me, I have an understanding husband because while I have an office, I have also commandeered the dining table as well!

Francesca: It always seems that I start new novels in September, as if studying for a new course. I guess this is because of sending novels off to the RNA’s New Writers’ Scheme several summers in a row. 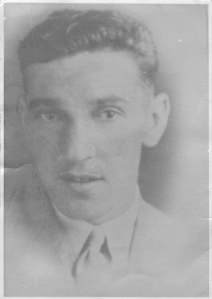 Francesca’s historical idea came from an incident in her grandfather Islwyn’s family.

Like Elaine, I attended the Woman’s Weekly workshop on historical fiction. Although I tend to write contemporary novels, and have just started a new one, I’ve had an idea for an historical bubbling away for some time that the workshop helped me develop. So which to continue with?

Because I did a history degree back in the dim distant past, several people have asked me why I don’t pursue that genre of novel. I have written several historical short stories and a serial, but I always seem to come up with masses of ideas for contemporary novels. It would be interesting to proceed with the historical, though there’s a danger I’ll get carried away with the research, for which I’ve acquired several books!

My other goal is to return to short stories. In the past I’ve had sixty-odd ‘out theres’ sent to various magazines, but I’ve sadly neglected them in favour of novels recently. And I’d like to write another serial.

Time to just get on with it, because as Bruce Lee once apparently observed, ‘If you spend too much time thinking about a thing, you’ll never get it done.’ Good luck with your own ‘new term’.

Do you have plans for the new school year or are you just enjoying the peace and quiet?