Francesca talks about the inspiration behind her 3-part serial, The Criterion, which begins in The People’s Friend this coming week.

The Criterion in the 1970s, having gone through a name change

I know I’ve mentioned before on this blog how some of my writing has been inspired by my family history. The very first novel I wrote, a Young Adult called Sea Angel, came about because of my own experience working in the family cafe as a teenager. My short story Far From Home,  published in the anthology 7 Food Stories from Rome began as my attempt to imagine what it might be like to move to England from Italy as a young widow with a twelve-year-old son, as my grandmother did. The idea for the historical novel I’m currently working on came from a World War One document I found on Ancestry.co.uk detailing the discharge of a Welsh great-grandfather on medical grounds.

The first of those is a contemporary, while the latter two both take place in 1915. My serial for The People’s Friend, The Criterion shifts to a different time entirely: 1955. It’s the era of the Ten Pound Poms, and the story begins with my main female character, Gwen Hughes, talking to her disgruntled grandmother about her impending departure to Australia. Renzo Crolla, the male protagonist, owns a cafe in Worthing, The Criterion of the title.

Some of the characters in the serial are based on real people, some are an amalgam, while others are completely fictitious. The story is based only very loosely on that of my family (I might tell you the real story one day). The Criterion in Worthing, however, was a real cafe, owned by my grandmother and father, a kind of character in itself. My grandmother, a war widow, emigrated to England in 1927 with my father. Much of her family were already over here. In 1930 she bought

My mum behind the counter c1958

The Criterion from her brother. I was born in the cafe twenty-eight years later and lived there until I was nearly four-years-old. My father rented the cafe out for a further seven years. Finally he sold it in 1968. It went on being a cafe for a number of years afterwards, known as the Californian, but today it’s a hairdressing salon.

The building itself is Georgian, so what it was originally I have no idea, presumably not a cafe. Perhaps my next project will be to find out something of its history. If I gather enough material I might be able to use it for another story! 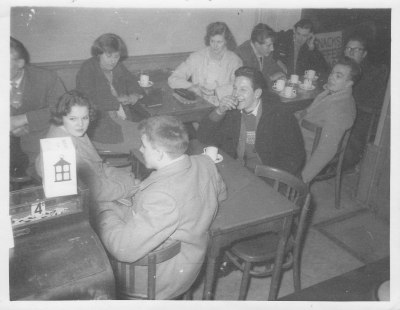 The Criterion, a 3-part serial, starts in The People’s Friend in the issue dated 27th May.

In the story, Renzo was interned on the Isle of Man during World War 2, as was my father. The piece I wrote for The Guardian about it can be viewed here

Me outside the cafe, 1959, with Worthing promenade in the background