Elaine Roberts talks about her time on the music trail in America.

I have never been on a coach-touring holiday before, so this was very much a first for me. Twelve days spent with the same thirty or so people, who were very friendly, but for someone who spends her days sitting at her laptop typing away, this was thrusting me into people’s company, whether I wanted it or not. Despite being ill for the whole of my holiday, at times only being kept upright by medication, I was armed with a notepad and pen so I could write any ideas or things people said, for either my current or future novels. Taking lots of photographs and memorising body language also helped. The culture your characters grew up in forms their views on life. As a writer you never stop working or learning. 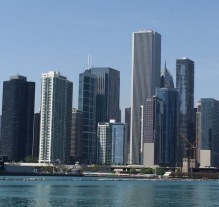 The holiday started in Chicago, with a skyline not dissimilar to New York. I had my first experience of going to a blues club, Buddy Guy’s Legends. Apparently, the man himself usually only performs there in January, but I had the honour of hearing him sing there in May.

He maybe in his eighties, but what a great voice and personality he has. I’ll be honest, I did have to Google him. He is a big name on the blues and jazz scene, having won six Grammy Awards, along with a lifetime achievement Grammy Award. The Rolling Stone magazine ranked him 23rd in its list of one hundred greatest guitarists of all time. Eric Clapton has been quoted as saying “Buddy Guy is to me as Elvis is to others”. Having listened to Buddy Guy, I can see why he has achieved so much, despite leaving school at fourteen with nothing. He is an inspiration to challenge yourself and work towards your goals, even if the odds are stacked against you. 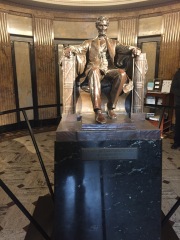 After Chicago, we moved onto Springfield, and no we weren’t there to see anything to do with the Simpsons cartoon series. We were there to see the burial site, home and museum of Abraham Lincoln. I found this day to be quite emotional as information about the American President unfolded. He started from nothing and taught himself to read and believed in himself. If ever there was an inspiration to reach for the stars, to achieve your dream, here he is. As a writer, there is always a lot of doubt and even the most famous authors have suffered from many rejections. The people rejected Abraham Lincoln when he tried to be elected as a politician and yet he became president. Why? He believed in himself, his wife believed in him, he picked himself up and kept going and he gained a place in American history. As a writer, my aspirations are not nearly so grand, but the belief has to be the same.

Our next stop was St. Louis. We visited the Gateway Arch there and watched a film on how it was built. As a writer of historical novels, it was good, if not scary, to be reminded there was not much health and safety around in 1963 when it was built. It is the world’s tallest arch at 630 feet high and 630 feet wide and to see the builders gripping tightly on to steel ropes, with the wind attempting to blow them off and no sign of any hard hats, safety harnesses or special boots, took my breath away. The film told how they expected to lose thirteen lives in the building of it, but miraculously none were lost.

Memphis was the next stop. This obviously involved a tour of Graceland, Elvis’s home and a couple of evening visits to Beale Street, where music-wise it all happens. The police had set up a cordon to enter the street; they checked ID’s and tagged us. They didn’t check my ID, but I don’t know if that was because I was British, or clearly over twenty-one, which is their legal drinking age. The street was full of restaurants and bars, each having live singers/bands. There was a party atmosphere along the whole of the street. Having been there, I can understand how Elvis was influenced by the music of his hometown. Of course, no visit to Memphis would be complete without a tour of Sun Studios, where Elvis, Carl Perkins, Jerry Lee Lewis and Johnny Cash all started, to name just a few. What a fabulous tour it was. Our guide was humorous and gave the group so much information. It was also good to know that modern groups still record there; Maroon 5 and U2 have recorded there in recent times.

The trip ended in New Orleans, which bore the brunt of Hurricane Katrina twelve years ago. So many sad stories came from the tour of that city, but also stories of how people have picked themselves up. It has to be said that it’s not the case everywhere, but they are getting there. The French Quarter occupied the daytime and the two evenings there were spent in Bourbon Street, popular for its live music, which could be heard from every club and bar on the road. We had lunch on a paddle steamer and a jazz band played as we cruised up the Mississippi river.

However you spend your time, or wherever you go on trips, there is always inspiration and ideas to be taken away. My trip was based mainly on music and historical events, information and ideas I’m sure will be used in the future. Music obviously played a big part in our tour and it was a reminder that, whatever you are writing, you should add it into your work where possible.

If you don’t wish to be a writer, work out what you do want and start putting your building blocks in place to achieve it. There are an awful lot of people out there that started with nothing, but have achieved greatness in their chosen field.

4 thoughts on “To Dream The Impossible Dream…”