Francesca looks back to the past, at some artifacts that would have been around in World War 1

As some of you might already have gathered, my second Valleys book, War in the Valleys is out in a couple of days. Writing it has brought to mind some relics of that era that I have stored in my bedroom drawers and in a box left for the children by their paternal great grandmother, that would have been around in the First World War.

First, there’s one of the lovely brooches my grandmother-in-law, Betty, gave me, back in the 1990s. The gold hallmark dates it at 1907, four years before Betty was born, and some research suggests it was a very popular design of the time. I know it belonged to her mother, Elizabeth, so I wonder if her father, Robert, bought it for her.

Another of the brooches, a silver Mizpah brooch, dates back even further, to 1889. Has anyone come across a Mizpah brooch before? The word ‘Mizpah’ is from the Bible and 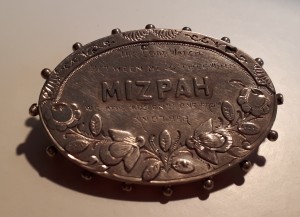 apparently means ‘watchtower’. The brooches became popular in the Victorian era, exchanged between lovers or good friends who were due to spend some time apart. As you can imagine, their popularity increased once more during the First World War. The age of it makes we wonder if it belonged to Betty’s grandmother, Hannah.

In Heartbreak in the Valleys and War in the Valleys, Elizabeth Meredith or her mother, Margaret, would possibly have been the only women in the village  able to afford the gold brooch. Most of the other characters, Violet Jones in particular, would have struggled to afford either. In fact, if Violet had owned one, she’d likely have sold it, as she did some of her furniture, to make ends meet. Working four days a week at the mine, sorting, coal from rock, would only have earned her around ten shillings and sixpence a week.

The items I found that all my characters would have had are the pre-decimal coins. Among them, the oldest coins are three Victorian pennies dated 1895, 1897 and 1898. Next are the three George V coins: a halfpenny dated 1911, a penny dated 1918 and a farthing, also dated 1918. Old coins like this have a particular smell, which I can only describe as sweaty metallic, with a bit of dank thrown in. It’s fascinating to consider how many hands they’ve been through. If each could have its journey mapped out, I’m sure it would make a fascinating tale. Although they ended up on Tyneside, maybe somewhere along the way they passed through the Rhymney Valley, where my characters lived. We’ll never know!

War in the Valleys is out on the 25th November and is currently on special offer at 99p on Kindle for a limited period.

Heartbreak in the Valleys, the first in the series, is also on offer at 99p on Kindle and Kobo, again for a limited period.

War in the Valleys: amzn.to/2HxbDhT

Heartbreak in the Valleys:

Do come and find me on social media and have a natter: