Francesca and Elaine reveal the inspiration behind some of their short stories.

Francesca: While the ideas for my short stories come from numerous sources, I have to confess that a number of them have come from my own family. The tales I build around these incidents are generally fictional, though there are exceptions. More on that later. 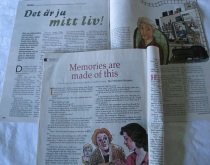 On one occasion I was trying to recall my great grandmother’s old fashioned scullery for a story set in World War Two. I was wondering what happened to the numerous coronation mugs on her dresser, some dating back to Edward VII, when a new story was born. Memories Are Made of This, published in Sweden’s Allas and India’s Woman’s Era, is about, ‘Nan’, who hoards far too much memorabilia. Her daughter, rather unkindly, calls it ‘tut’ and attempts to clear it out. My gran wasn’t a hoarder like Nan, who luckily has a grandson who comes to the rescue.

‘An Alternative Christmas’, renamed for The Weekly News.

The inspiration for An Alternative Christmas (published in The Weekly News as Party With a Twist) came from my older son and his partner, who are what some would call, ‘alternative’. It’s the tale of a street suffering a Christmas power cut and how you shouldn’t always take people at face value.

Tiger Lilies for Aunty Carlota, published in Norway’s Hjemmet and Sweden’s Hemmet contains rather more of the original thirty-four-year-old tale.

In it, Lottie loses her favourite great aunt and one of the older nephews, Renzo, tries to squirrel away the aunt’s possessions for himself. In the process, a tiger lily necklace, willed to Lottie, goes missing. Aunty Carlota is based on my great aunty Carmela, and Lottie is me. Renzo, in reality my dad’s cousin Luigi, did much to manipulate my aunt’s will and stole items that were meant to be part of the estate, including a necklace (a Madonna rather than a tiger lily). The tiger lilies came about because I took a bunch of them to Aunty Carmela a week before she died, as does Lottie. The story’s theme of avarice and how cheaters don’t prosper sadly wasn’t the reality.

Sometimes it’s very satisfying to put right a wrong, if only in fiction. 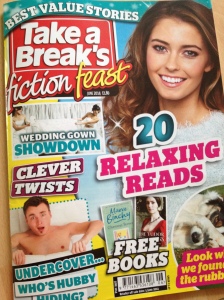 Elaine: I often get ideas through conversation or people watching. The news or articles also often spark ideas, as well as looking at old photographs. Once I start mulling things over, my idea tends to sprout wings and it takes me wherever it wishes to go.

I’m not altogether sure what sparked my ideas for the short stories I have written, or the novels, mainly because some of them have been quite random.

Other story ideas that I’ve had have evolved. I wanted to write something about going to a garden centre, no idea what, but that ended up being how it ended.

I think I usually have a one sentence idea, which is usually a setting, like the garden centre or an office, but that quite often doesn’t end up being what my story is about.

The story was called One Step Closer

One of my favourite short stories, A Dorothy Moment, was published in Take A Break Fiction Feast. The story was about someone retiring from work and buying a pair of high-heeled red shoes that would never be worn.

The idea came to me as I stared aimlessly out of the office window where I work, wishing I could retire, and that is how my story starts. It is written in the first person and all through the story, it is believed that the modern shoes are for that person. It is only when the end of the story is reached, it comes to light that the husband has bought them for his wife. He knows she could never possibly wear them but he has seen her eyeing them in the shop window, so it is his last extravagance before he retires.

That’s what staring aimlessly out of the window gets you.

What has inspired some of your stories?