Elaine Everest, wishing there were more hours in the day and days in the month!

I know it’s been said before but where has the year gone? It doesn’t seem five minutes since I was writing last month’s blog piece and only days since I declared my writing intentions for 2014.

For some crazy reason I’d decided back in January that I was going to increase my output of articles and research new markets for my journalistic work. This was mainly because the Everest household was facing redundancy. ‘Him indoors’ was being cast aside by the American owners of the company he worked for, along with every other long serving employee. The company was making excellent profits, and providing a much needed service to the medical industry, so it made no sense that the work force (most being over the age of 55) were faced with possibly never working again. Sorry, rant over! However, ‘Him indoors’ secured a lovely job after we wrote to over fifty companies in Kent enclosing an SAE, letter and CV – we didn’t mention that he was over sixty. Seven replied. I almost started a fresh rant about people who can’t reply to a letter… We tackled the problem head on by writing those letters. Employment agencies are ageist and can be so depressing to the older person. We needed to stay positive. It worked. In July, American Independence Day in fact, he leaves the employ of the Americans and joins a good old British firm.

Something else happened in January. I found myself an agent – imagine me dancing around the room at this point – I had to pinch myself. Had she made a terrible error? Did she mistake me for someone else? It seems not. Isn’t this the dream that every writer hopes will happen? So, instead of thinking about the aforementioned article research I found myself researching World War Two and the people of Kent once more. Yes, I have my dream job, writing Sagas set in the war years. Vera Lynn sings in the background as I work and old black and white films are constantly running on my television. I’m back in the zone. My word goals for the week, along with research, leave no time for much else in my life. I’m not even sure I’ve stepped outside the front door since then!

The other big event for me was in May when along with sixteen other novelists I attended the Romantic Novelist Association’s Summer Party as one of the nominees of the Joan Hessayon Award. It was fabulous. So many people were complimentary about Gracie’s War that I felt just like a winner even though that honour went to Jo Thomas. There’s nothing better than being in the company of so many lovely authors most of whom I first met on the shelves of my library and Waterstones. 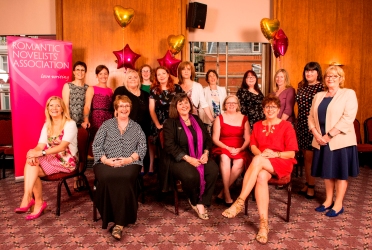 Looking forward I’m hoping to be able to hand my new book over to my agent Caroline Sheldon, who has been so helpful as I move onwards in the writing world. Fingers crossed that a publisher will like my book. If not I may well be researching new markets for my articles!

Elaine Everest explains why she joined the ranks of bloggers and tweeters.

If someone had said to me that one day I’d been blogging and tweeting I’d have laughed in their face. I always thought blogging was for people who wrote for fun. It wasn’t something that those who wrote for a living did, unless of course it was a paid blogging job! As a jobbing writer, long before I sold my first non-fiction book, Showing Your Dog, A Beginner’s Guide, I knew that when I sat at my keyboard each day I was there to write articles, features, short fiction or another non-fiction book. My opinion remained the same as Canine Cuisine then A New Puppy in the Family followed along with countless high profile charity books. My promotion of these tomes was undertaken through radio interviews, newspaper features, talks and book signings. Sales were good and I was happy. Then, along came my first commissioned novel – an ebook called Gracie’s War and things changed.

It’s not possible to promote ones first novel at author talks and signings if it is an ebook. Perhaps if an author had previous hard copies of novels under their belt the ebook could be promoted face to face with postcards printed with the cover and download details. However, authors need to sell books when they make appearances and it wasn’t likely that my talk about three dog related books would sell many copies of a World War Two romance. No, I had to find another way to promote Gracie’s War.

My lovely publisher, Pulse Romance (part of the Myrmidon Books) knew just how to promote an ebook. In October, they started with a cover reveal. This was shared by a group of bloggers on a set day. We also tweeted and covered the reveal on Facebook and various websites. Friends and colleagues shared my posts – thank you friends and colleagues! Two weeks later, when Gracie’s War was released, enough interest had been generated to make excellent sales from day one.

Moving into December again Pulse Romance pulled a blinder. They organised a twenty date blog tour overseen by Shaz Goodwin at Fiction Addiction Book Tours. Gracie set off around the world. Bloggers interviewed me about my writing while others reviewed the book. I went to my Facebook page and Twitter account to share these posts. Initially I was worried about mentioning Gracie’s War too much. I was aware that some established authors knocked us writers who promoted our ebooks on FB and Twitter. They came from the days when books were made of paper and were able to promote their work in other ways, we couldn’t do that. I tried to add an interesting hook to my posts. The paddle steamer Medway Queen returned to Kent after major refurbishments. I used this news to promote Gracie’s War as Gracie’s father’s steamer, the Kentish Queen had also travelled to Dunkirk with all the other little ships. The interest was phenomenal, I needn’t have worried. Feedback was excellent. We shared comments on Facebook and also Twitter to keep the momentum going. Readers were extremely generous and it reflected in the Amazon reviews.

It was during this time that I realised that I was wrong about blogging. The bloggers I originally knew were writers of one form or another. The bloggers who work on book tours are readers and reviewers and therein lies the difference. We should value these bloggers they are the lifeblood for those of us who write ebooks. I for one am extremely grateful. Thank you.