Someone asked me a while ago about the Welsh phrases used in the Wartime in the Valleys series. Although it’s implied that my characters are speaking Welsh much of the time, as many would have in the Valleys a hundred odd years ago, I’ve been careful to use only a few expressions, to add a flavour of the area.

I think some people have struggled with these expressions so, as the third in the Valleys series is going to be published in a week, I thought I’d write a blog post including all the phrases used and their translations. I’ve been through all four books (as there’s another, Trouble in the Valleys, due out in the spring), so hopefully have found them all.

I’m not a Welsh speaker myself, as my Welsh mother wasn’t either, only speaking a few phrases, but I’ve been endeavouring to learn some on Duo Lingo. Whether I’ll ever feel proficient enough to talk to a native seems currently unlikely. Unless it’s to say ‘Bore da,’ to my Welsh speaking friend Angela Johnson (author of another novel set in Wales, Arianwen) as we meet for a coffee. It’s been an interesting experience, learning the language of my past ‘fathers’. I think my mum would have enjoyed the opportunity to have a go at Duo Lingo too, if such a thing had been around in her time.

My favourite Welsh phrase of my mother’s? Ych y fi! You have to hear it said to appreciate how much it evokes what it means, which is Ugh! But to give you an idea, it’s something like ‘uh-ch ah vee‘, where the ch is a guttural sound at the back of the throat.

As Truman Burbank (sort of) said in The Truman Show , ‘Bore da, and in case I don’t see ya, prynhawn da, noswaith dda a nos da!’

Hope in the Valleys is out on 20th January, currently available as an e-book and paperback, and can be pre-ordered from these outlets:

Link to Amazon in all countries: author.to/FrancescaCapaldiAuthor

It’s three weeks now since we were saddened to hear of the death of our friend and fellow author, Rosemary Goodacre 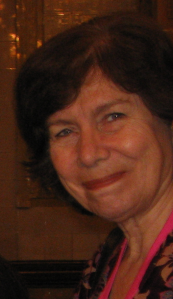 Rosemary had been ill but was recovering and looking forward to the release of the third novel in her Derwent Chronicles series, Until We Can Forgive. She was busy getting started on her blog tour questions, when she was sadly taken from us. Here we recall times we’ve spent with Rosemary, and take a look at her latest novel. 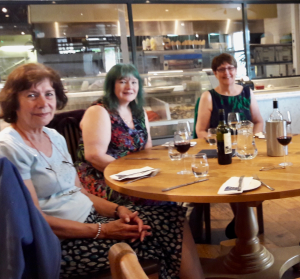 Francesca: I first met Rosemary in an Adult Education class for creative writing, run by Elaine Everest, back in 2006. We’d been in various classes together since that time, as well as both attending Writers’ Holiday weeks and many Romantic Novelist Association events. Often she wrote things that were a little different, like a novel she was working on several years ago that involved chemistry classes and poisonings!

She was a well informed and cultured woman, with knowledge of foreign languages, yet never blew her own trumpet. She was great fun at social events. I recall the last RNA conference we were at, one evening, sitting around our flat’s kitchen table, playing a game which involved singing various songs, and Rosemary joining in as enthusiastically as the rest of us (I dare say a little alcohol was involved!). She will be sorely missed by me, and there’ll be a Rosemary-shaped hole in our group of friends for evermore.

Elaine: I first met Rosemary at The Write Place in 2012. I will always remember Rosemary as a well read and intelligent person. Her interests were quite diverse, as indeed was her reading. I know she loved playing bridge, going to the theatre and having some more unusual holidays. However, she also had a scatty side to her unassuming nature. She was a lovely lady that would never want to offend anyone and was also someone you couldn’t get cross with. 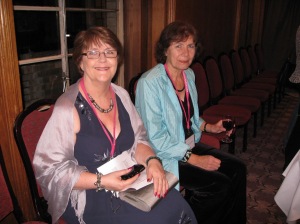 When we were travelling to Romantic Novelist’s Association events together, like the conferences, she was often waiting for everyone in the wrong place. We all worried about losing her when we were going anywhere as a group. I remember arranging to meet her just inside the doorway of a summer party we were both attending and I waited for sometime before I was told she was already upstairs. She was very apologetic when she realised but it was just another moment where you just thought ‘that’s Rosemary’, she didn’t have a malicious bone in her whole body.

I will miss her more than words can say, as I’m sure everyone who knew her will.

Until We Can Forgive

Spring 1919: WW1 is over and a fragile peace has descended over the country. Now living in Cambridge with husband Edmond, Amy Derwent is settling into her new life as wife and mother to little Beth. But the shadow of the Great War looms large, particularly as the injuries Edmond sustained at Ypres still take their toll on him today.

Edmond’s cousin, Vicky, has now grown into a fine young woman, eager to help her
country. Throwing off her privileged background to train as a nurse, she spends her days tending to the many soldiers still suffering the after-effects of their time on the battlefield.

Meeting Maxim Duclos, a young Frenchman who has arrived in Larchbury, fills her heart with joy – but when it is discovered that Maxim may be hiding the truth about his past, Vicky is faced with an impossible choice. Follow her heart’s desire and risk her family’s disapproval or keep her family – but deny herself the chance of true love?

The war may be over, but Edmond, Amy and Vicky must all face a new battle, finding their own peace in a country wounded by loss.

Available on Kindle and paperback at:

The first two books of the Derwent Chronicles:

Until We Meet Again

Until the War is Over

We welcome back writer Rosemary Goodacre, whose World War 1 saga is out today

Hello Rosemary and thank you for visiting the Write Minds blog with your new book Until We Meet Again.

Hello, Francesca and Elaine, thank you for welcoming me to the Write Minds Blog.

What led you to writing about World War 1 as opposed to another period in time?

I suppose it was all the media interest as the centenary came up. My grandparents could remember the Great War, yet in many ways it seems like another world.

With the novel being set over a hundred years ago, what kind of research did you have to undertake?

I read memoirs from the time. There was also a wonderful film called They Shall Not Age, which was reprocessed documentary WWI film with colour added. There was even dialogue, which they had constructed from the original speech, with the help of lipreaders. You could get a vivid impression of the hardship the men actually encountered in the trenches.

Sometimes real people give me an idea for a character, though they may need adapting to have the outlook people would have had at the time: for example, at least at the beginning of the war, women had much less freedom. Sometimes a fictional character who was inspired by a real person suddenly takes over and insists on setting off in a different direction!

Which character from the book have you most enjoyed writing?

The hero and heroine, Edmond and Amy, became brave, inspiring people when their world suddenly became so dangerous and challenging. I kept thinking of the men who somehow managed to joke and sing, even in the trenches.

How did you get started in writing?

I’ve written stories for many years, and sometimes become immersed in entire novels. I started going to classes and gradually became more serious about getting published. The occasional early success with a short story boosted my morale. I like to think I’ve become more professional as the years have passed.

What can your readers look forward to next?

I’m working on a sequel to Until We Meet Again, so I’m hoping Amy and Edmond will be back before long!

We’re so glad you could drop by to talk to us. All the best with Until We Meet Again.

It’s been lovely visiting your site, thank you so much for having me as your guest.

Until We Meet Again

The Great War drove them apart – but love kept them together

Summer 1914: Shy young woman, Amy Fletcher, lives a quiet life in Sussex. An office worker, she lives at home, along with her parents and spirited younger brother, Bertie. But her life is transformed when she meets handsome young man, Edmond Derwent, son of one of the wealthiest families in the small town of Larchbury, and student at Cambridge University.

The couple are falling deeply in love when war breaks out and, eager to do his duty for England, Edmond signs up as an officer. The couple plan to be wed, eager to start a new life together – but their happiness is short-lived when Edmond is sent to Flanders to lead his men into battle. Amy trains as a VAD nurse and is soon sent to France, where she sees the true horror of war inflicted on the brave young men sent to fight.

Separated by war, Edmond and Amy share their feelings through emotional letters sent from the front line. But when Edmond is critically wounded at Ypres, their love faces the biggest test of all – can their love stay strong while the world around them is crumbling?

A romantic, emotional saga set in WW1 – readers of Rosie Goodwin, Katie Flynn and Val Wood will be captivated by this story of love.

Rosemary Goodacre has previously worked in computing and teaching. She has had short stories published and a novella, A Fortnight is not Enough.

Her father’s family came from continental Europe and she loves travelling.
She enjoys country walking, bridge and classical music. She lives with her husband in Kent, England.

Read more about  Until We Meet Again by following the tour: