The Eurovision Song Contest is almost upon us. Francesca takes a look at the elements of story telling within it. 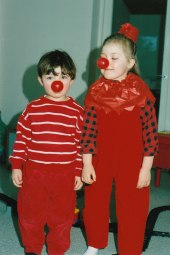 It occurred to me recently, after hearing an announcement about this year’s UK Eurovision entry, that the contest has many of the elements of a story telling, encapsulated in one evening.

For a start, there are a whole host of diverse characters who appear to have been drafted in from several different genres. Who could forget Lordy, the Finnish heavy metal band who won in 2006? They’d surely stepped out of an episode of Star Trek. Jedward, who represented Ireland in 2012, were dressed as futuristic sci-fi characters as envisaged in the 1970s, with their insane silver space suits. At the other end of the scale, grandmas who would have been at home in a Russian epic took to the stage in 2012, namely The Grannies of Buranovo. In 2013 Romanian Cesar brought horror with his (accidental?) depiction of a modern day Dracula, while singing, perversely, a sugary love song. And these are just a few of the many crazy personalities representing their countries. 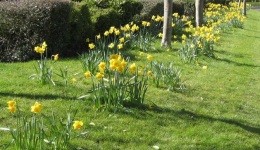 All Kinds of Everything…

History is recalled in Abba’s Waterloo. For weird comedy, I present you with Ireland’s Dustin the Turkey, a puppet, who sang Irelande Douze Pointe in 2008. This turned out, appropriately, to be a ‘turkey’, not even qualifying for the show. Nil points before they’d even started.

Of course, romance abounds. Feel the profuse declarations of love in Lulu’s Boom-bang-a-bang (1969) and Cliff Richard’s Congratulations (1968), the sweetness of Dana’s All Kinds of Everything (1970). Cry at the heartbreak in Johnny Logan’s What’s Another Year? (1980).

Romance, history, dystopia, comedy, sci-fi and fantasy – it’s all there. You might say crime is represented, as some of the songs are murdered (Jemini’s UK entry in 2003 anyone?). And there’s mystery – how on earth did some of them even get picked?

The show itself begins with ‘conflict’: who will triumph, who will fail, who’ll make a complete wally of themselves? The scoring, by far the best part in my opinion, provides nail biting tension. Friendships and rivalries surface, even if quite a lot of inevitability sets in. There is disappointment and elation as the show moves towards the denouement and we discover the winner. 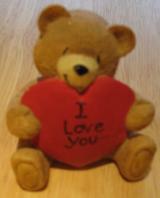 Love songs seem to be the most popular

But then, sometimes there is a twist. Take 1968, when Cliff lost by one point to Spain. 1969 saw four winners.  In 1988, the UK’s Scott Fitzgerald was ahead by the time they reached the penultimate vote. Then Yugoslavia gave Switzerland six points, making Celine Dion the winner by one point. Gripping stuff.

Not long now till the next episode of the saga known as the Eurovision Song Contest. What new elements will be thrown into the plot this time, what new declaration of love, what rivalries, what totally bonkers characters? Whatever they are, have a good time loving it or hating it!

One thing you could do to generate story ideas is to look at the Eurovision song titles, maybe combining two or more of them to add other elements. What would you make, for instance, of Better the Devil You Know, Knock Knock Who’s There and Waterloo?

For more information on this year’s contest: Eurovision Song Contest

My writing competition post at the RNA blog. Still some comps open for you to enter.

Francesca and Elaine discuss how inspired they are when they listen to music.

Francesca: Over the years I have found songs useful not only for sparking fiction ideas, but for finding titles for short stories I’ve already written. 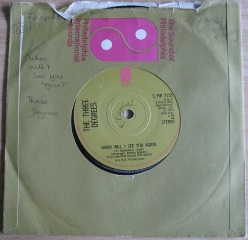 When will the characters meet again?

Some of these stories are still in idea form in my ‘Cooking’ notebook. Others have been written but not polished enough to send out, for instance This Old House, about someone visiting what used to be their home. The Night Has a Thousand Eyes was just the right title for a story about someone wishing on a star for the perfect love when he was right in front of her. When Will I See You Again was number 1 the day many of my friends left school and always reminds me of that time. It inspired a story about meeting someone again many years after, you guessed it, leaving school.

For the story of a Valentine’s dinner that burst into flames (based on a true incident in my life) I Don’t Want to Set the World on Fire was the perfect title. As Tears Go By, is about a girl missing her… but if I tell you that and it’s published, I’ll give the twist away. 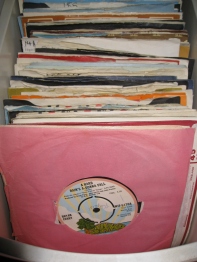 Flicking through a record collection for inspiration.

Among the stories I have had published, Memories Are Made of This (Sweden’s Allas  and India’s Woman’s Era) seemed an apt title for the tale of a hoarding grandmother. Goat’s Head Soup (The Weekly News), is about an unusual dinner party. Waiting on a Friend (Woman’s Weekly) is about an old man about to meet a good mate he hasn’t seen in many years.

Three of my all time favourite songs/tunes, Summertime (from Porgy and Bess), Stranger on the Shore and Sleepwalk, have, oddly, never engendered any story ideas for me. I think perhaps only the middle one would make a good story title. All three do remind me of long, hot summers as a child and are therefore useful for mood creation – but that’s a different topic altogether.

It’s time I tidied up some of those unpolished stories and got them out there.

Elaine: One of my favourite pastimes is listening to music. 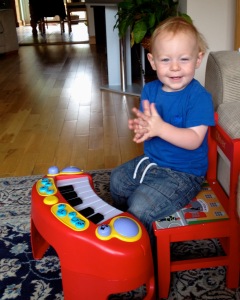 My grandson with his piano.

Music can set the mood, time and era in your writing. This is something I have included in my novels, however I do believe there is a copyright issue, depending on how much of a song or title you use.

For me, song writing is the ultimate short story and the titles are often used for these. The lyrics of songs have been known to reduce me to tears on more than one occasion. Music is linked to events in my life, the obvious one is a wedding day, but it can also send me back in time, and suddenly I’m reliving my youth, even if it’s only for three minutes. Therefore, it is logical to link music to situations.

I can’t say I have ever listened to a piece of music and been inspired to write something, which is strange in itself, as I know other authors have.

When I write a short story, it tends to stem from a situation, but as I’ve said, music sparks situations in your mind, so therefore, I will set myself a challenge to pick a song and be inspired to write a story. Am I alone in this? Let me know your thoughts.

If you’re struggling for inspiration, why not trawl through an old copy of a hit singles book or the internet for song titles/themes? This site has the top 100 UK hits for all the decades from the 1950s till now: http://www.uk-charts.top-source.info/uk-chart-history.shtml