Elaine Roberts has a fascinating hobby, and it’s not writing!

I have been on holiday for the last week, enjoying the sunshine in Cornwall and Devon, staying 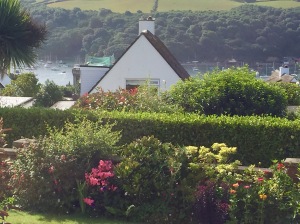 River Fowey from our bedroom terrace

near the River Fowey and then moving on to the River Dart. One of my favourite hobbies is people watching; it fascinates me and only last week, I watched them while tucking into the lovely Cornish ice cream. The decision making of which flavours to have; banana, liquorice, caramel, bubble gum and coffee, along with the more traditional ones, was a feat in itself, hmmm. Anyway, as a well-known comedian once said, “I digress”.

Watching young and old alike, I thought how much happier people seem to be when the sun is out. Couples held hands, sometimes giving each other a little kiss as they sat in the sun or walked along. Children were laughing and, I don’t know about you, but whenever a child laughs, I start smiling myself. Everyone was moving slower, enjoying the heat on their bodies, some tucking into cones of ice cream; many children’s faces were covered in it. Adults and children were fishing for crabs off the riverbank, some celebrating their catches. 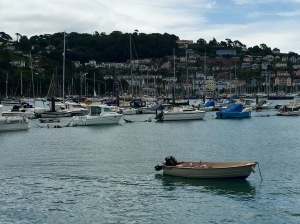 The view of the River Dart from our hotel room

Many older couples appeared to be in their own world as they sat by the river, watching boats of all shapes and sizes sail by, some barely acknowledging each other’s existence. The younger people seemed lost in their mobile phones, texting or playing games. In this instant world, I watched people of all ages allow the mobile phone to interrupt or replace conversations.

I smiled as a grandma tried to use the modern method of getting a small child to do as they are told by counting to five. The child laughed and carried on running around the restaurant, with the grandma following her. As you can imagine, in the child’s eyes, this became a game.

It made me think about the writing of characters and settings. Everything around us is a feast for a writer to indulge in. Does the weather affect their moods and also what they are wearing? Does it make them forget, or reinforce their problems? Does the sun have a therapeutic affect on their personalities, or when they have a problem, do they notice what the weather is doing?

The question I asked myself was – is this reflected in my writing? I like to think yes, but maybe I need to have another read through, just to be sure. Perhaps I’ll have ice cream first.

Elaine Roberts asks can dreams be met in isolation.

This last week has been an emotional rollercoaster. Seven writers travelled together by train, first class naturally, to attend the Romantic Novelists’ Association (RNA) Conference at Lancaster University, and what a hectic four days it was. The university campus was very large and, needless to say, we did get lost, but in the process we met some lovely people who were kind enough to point us in the right direction. 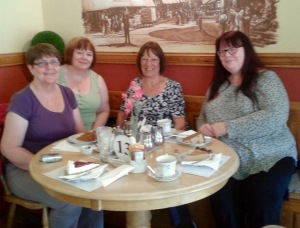 Elaine, Francesca, Natalie and I at our Ramsgate Writing Retreat earlier this year.

It was wonderful to meet up with old friends and make new ones; don’t tell anyone but an awful lot of wine got drunk while we were there.

I was lucky enough to secure meetings with a couple of agents, who shall remain nameless at this stage, but they were very helpful in giving me direction and making suggested amendments to improve my work, before I send in my whole manuscript. I was thrilled with my feedback and it all helps to keep the motivation going. However, the work feels a little overwhelming and the thought of sending in the whole manuscript is quite scary!

There were some wonderful workshops and panel talks, which I attended. It is always good to be reminded of aspects of the writing world, which may have been forgotten in the rush to write a novel. All seven of us came away with good news and constructive criticism on our work, which is worth its weight in gold.

What I think is important is the support network that family, friends and the 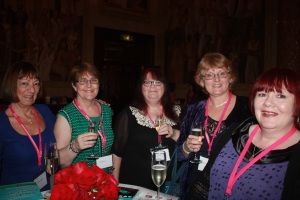 RNA have given me, I am certain that without that I wouldn’t have made it as far as I have. I attend The Write Place in Dartford and Elaine Everest is very encouraging and supportive of everyone who attends there.

If you have a dream follow it and see where it takes you. There may not be time to do it full time because of work, family or other commitments, but start with small steps. Join a class, a group or an organisation. Look into an on-line course, but give yourself a chance. There will always be someone around you being negative, but don’t let them stop you from trying; as the saying goes, “it’s better to have tried and failed than to have never tried at all”. I was on social media and someone added a link to a video, Omeleto, talking about Regrets, please search and watch it to the end. It’s a highly recommended watch. It left me asking the question am I a “kinda” person? No I am not, so I am working hard on my edits and sending my work off.

Are you a “kinda” person?

Follow your dream because it can become a reality, I believe I am within touching distance of mine.

Francesca discovered that there’s more to creating a sound atmosphere for writing than simply listening to music. 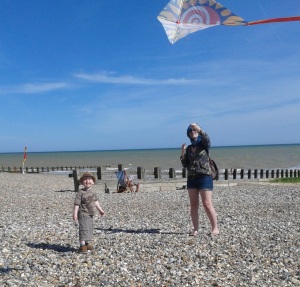 Scene from a summer place.

I often use music to set a scene for myself when I’m writing. Sometimes this is because that particular music is being played in the scenario concerned (like Scheherazade, well loved by one of my characters). Often it’s because the music evokes the setting I’m writing. Songs like Gershwin’s Summertime and Theme from a Summer Place summon up long, hot summer days on the beach. Well they do for me. Apart from this, I’m someone who, on the whole, tends to like to work in quiet.

My daughter Giovanna, on the other hand, hates silence, preferring background noise. It doesn’t have to be music. She recently revealed she often studies to the sound of a cafe, or rain, a new idea in boosting productivity. I have relaxation CDs of nature sounds myself, rain, sea and so on. But cafes? It turns out there are many sites on the internet where you can listen to all manner of sounds. Now that, I thought, could be really useful in evoking a setting while I’m writing, so I did a little investigation. 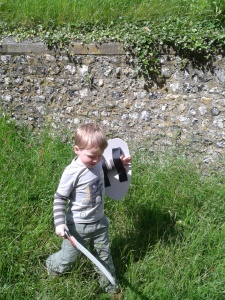 Create the atmosphere of battle.

For a start, You Tube is full of these ‘videos’. Some are on a loop, therefore not so satisfying, so you need to explore a little. They can be anything from an hour to eight hours long. Among the many I found were rain on a tent, a sailing ship on rough sea, a campfire, an echoing cave, office sounds, an airport, Hallowe’en and various Star Wars settings! There are many other sites offering these location sounds and it’s quite easy to google them to find one that suits you.

There are also several websites where you can mix your own sounds for a bespoke atmosphere. These include historical soundscapes such as battlefields and medieval scenes (one of which was an execution!). While useful, it’s tempting to spend rather too much time on these, investigating what they do. It’s probably better to stick with the ready made sound scenes they provide, of which there are plenty.

Right, I’m off for a cup of tea and the sound of a cafe…

Some links to get you started: