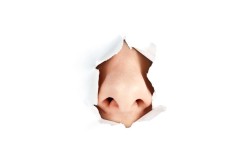 Elaine Roberts talks about the sense of smell.

It is said that our sense of smell is the first of our senses to be developed and I believe it is one we rely on without actually realising it. So much so that when I started writing, I didn’t include it at all, what a lot I had to learn!

When I first thought about writing this, I was going to say that a smell could evoke memories the same as a photograph but having thought about it, I think that’s wrong. It’s more instant than a photograph. The smell of lavender immediately transports me back to happy childhood memories at my grandparents’ home in Hampshire. It’s not a conscious thought, I don’t think about it, it is quite literally instant. The smell of freesias reminds me of my wedding day because they were in my bouquet.

Helen Keller, who was deaf and blind, once said “Smell is a potent wizard that transports you across thousands of miles and all the years you have lived.”

Diane Ackerman is also quoted as saying “Nothing is more memorable than a smell. One scent can be unexpected, momentary and fleeting, yet conjure up a childhood summer beside a lake in the mountains.”

I believe both of these quotes to be true.

Throughout our lives we are bombarded with smells that we take for granted or just ignore because they are part of our normal day, the smell of coffee is probably a good example, or a meal cooking. When I was pregnant with one of my children, the smell of mince cooking made me nauseous. Even if I was out walking and it was coming from someone else’s kitchen I used to wonder if I’d make it home without being ill. To this day, thirty odd years on, I still get that same feeling when I smell it cooking. A lot of my childhood was spent living in Cyprus, time by the sea, covered in protective sun cream, both having distinctive smells, let alone the fresh smell of fruit growing on trees as I walked to school.

In writing, smells can be used to describe settings. An obvious one is what my mother fondly calls country smells. She grew up on a farm so for her it triggers fond memories, but for me it’s a smell I can’t abide. The musty smell of damp could tell me more about the setting; for example, it might be a run down cottage in the country.

When smells are described in novels or short stories they add another layer to it and transport the reader to the correct time and place.

Join us on 26th May when Natalie will be concluding our series by talking about TASTE.

8 thoughts on “The Sweet SMELL of Success.”