Francesca looks at how growing up in cafés between the Fifties and Seventies has influenced her novels, as she continues the series inspired by The Great British Bake Off. And there’s ice cream!

After a day working at the cafe as a teen

All writers are bound to be influenced by their own upbringings, and it’s certainly true of me. The first novel I ever wrote was a YA called Sea Angel. The main character in it was fourteen-year-old Morwen. Although her fortunes and failures weren’t mine, and I didn’t have to live over the place like she did, we naturally had much in common. That included youthful resentment at having to work in the business in our spare time.

I pictured Morwen’s café to look much like our own, even if I did lift it out of Littlehampton and place it in an imaginary Sussex village called Littlebay. Recently it has featured again in both a 1970s pocket novel I’ve written and in a saga I’ve begun set in 1914, where it remains firmly in Littlehampton.

The Mediterranean in the early 60s, circled.

The business in Littlehampton (incongruously called The Mediterranean), was a seaside restaurant serving (in my humble opinion) some of the best fish and chips I’ve ever tasted. It also sold pork and lamb chops, sausages, ham, eggs, spam and spam fritters (remember those?) in different combinations with chips and a choice of beans or peas. There were also ham or cheese salads and roast beef and two veg. Over the years the menu changed little, being what the day trippers desired during the Sixties and Seventies. 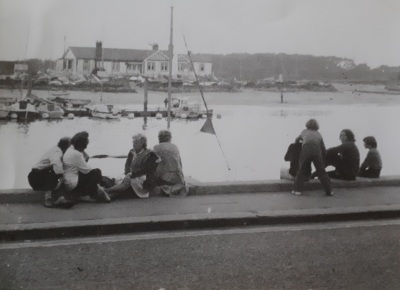 View from the Mediterranean of the River Arun

The fish was delivered fresh every day from a local fishmonger. I recall a long-time chef we employed boning the cod and plaice with great skill. There was certainly nothing frozen. The kitchen housed two large fryers into which were melted huge blocks of lard. In the basement was a peeling machine that removed the skins before the potatoes were chipped. This was originally done by a type of guillotine hand slicer, then later on an electric chipper. They were then part fried and kept in an industrial sized fridge in the basement until needed. Twice fried chips before they were even a thing!

For dessert you could choose between peaches and/or ice cream, chocolate gateau, apple pie and cheesecake. We also served up a very nice frothy coffee (in the days before there were myriad variations) and strawberry, chocolate or pineapple milkshakes, made with ice cream.

The Criterion in the early 70s had a name change

Regrettably, there was never time to bake our own cakes, though we did get them delivered from a nice patisserie.  Further back, when my father had The Criterion café in Worthing, there was a time when he made his own ice cream. I never thought to ask Dad what his recipe was, though I do recall him saying it involved large cans of condensed milk.

This café, where I spent the first three years of my life (especially since we did live over this one), was more a snack based eating establishment. It used to open from nine in the morning till eleven at night, the evenings attracting the café youth culture of the Fifties.

The Criterion featured in a 1950s series I had published in The People’s Friend called Happy Days at the Criterion. It tells of the meeting and romance between Gwen and Renzo, based on how my own parents met and got together.

A busy evening at the Criterion, c1958

Back in the early 90s, I acquired an electric ice cream making machine. I think these days they’re much easier to use, but back then you had to keep adding combinations of salt and ice to the outside layer and the whole process was a real pain. It made me wonder what kind of effort Dad had expended in making it by hand. I persisted with the machine and made many different flavours of ice cream over the decade. One of my favourites has to be brown bread ice cream.

Brown bread ice cream originated in the Georgian era. It seems to have made a bit of a comeback recently, though I first tasted it in a restaurant in Lincoln over thirty years ago. It was this that prompted me to try making my own, once I took possession of my machine.

It’s been many years since I gave up on the contraption, but I still have the recipe for the brown bread ice cream, which I make occasionally now by hand.

Ice cream dishes and a tablecloth I kept from the Mediterranean

Put the milk and vanilla into a heavy-based saucepan and bring slowly to the boil. Remove from the heat, cover and stand for ten minutes. Remove vanilla pod and reheat to simmering.

Beat the egg yolks and sugar in a bowl until thick and pale yellow. Gradually pour the hot milk into the eggs, stirring continually. Strain into a heavy-based or double saucepan and stir over a gentle heat until the custard thickens enough to cover the back of a spoon. Do not boil. Allow the mixture to cool and place in a freezer for one-and-a-half hours, until mushy.

Gently toast the breadcrumbs under a low grill, turning them to ensure they toast evenly. Put aside to cool.

Beat the cream to form soft peaks. Fold the cream and breadcrumbs into the frozen custard and freeze. Beat the mixture after one hour, then seal and freeze.

The Mediterranean was sold in 1981 and for a time became a  burger bar. It eventually returned to being a fish and chip restaurant called Osca’s. It looks very different to when we had it, but I’m pleased to report that their fish and chips, tried recently by Elaine and me, are excellent and I recommend a visit if you’re in Littlehampton.

Francesca’s latest novel, Heartbreak in the Valleys, a Great War saga set in Wales, will be published June 10th 2020 and is available for pre-order.