As February draws to a close, we find out if our team reached their goals.

Elaine Roberts: February has been a strange month. It doesn’t feel as though I’ve achieved very much. One of my goals was to finish editing my novel, Taking It Back, but I’ve come to the conclusion you never finish editing. In theory I’ve achieved this goal, and the first three chapters have been submitted to an agency, along with my introductory letter and synopsis. I say in theory because I’m now trying to read it as a reader, without any analysis, and I’m still finding things I want to change. However, I have achieved my goals of completing it and writing a short story.

Elaine E and Vivien at the RNA summer party, 2013.

Vivien Hampshire: A lot of external factors – from health problems, to packing up the contents of a house to be sold, to the inevitable disruption during the creation of my new writing room – have hampered progress this month. Excuses, I know, but real and unavoidable ones, I’m afraid. Still, I did get two short stories and two commissioned articles written and subbed, and I managed to move the novel on by around 6,000 words and finally decide on its title, so I have not been totally idle!

Elaine Everest: I’m pleased to say that I fulfilled my goals for February. Research into local history did tend to divert my attention. After attending the London Chapter of the RNA and being reminded to keep writing and only research when it halts the writing process I was able to keep to target.

The news that I’m excited to share is that I have a literary agent. Caroline Sheldon of the Caroline Sheldon Literary Agency has taken me on and I am now part of her list of authors. I’m the only one I haven’t heard of!

Natalie Kleinman: This month I have submitted six short stories and written another 6,580 words of my novel. When I look back its pretty similar to what I did in January so maybe there’s a pattern I was unaware of. I also sold another short story with the suggestion that a further one would be taken in a few weeks time when the editor’s rush to put out a Special is out of the way. I’ll let you know. Apart from that much of my time has been spent working on blogging, either here or on the Romantic Novelists’ Association

Francesca Capaldi Burgess: The month hasn’t been as great a success as I’d hoped. Family visits and commitments, along with poor health, have meant that I’ve done a lot of planning but not a great deal of actual writing. I’ve had a new idea for the novel which means going over it from the beginning before I continue. I managed to rough out several short stories and was in charge of the blog this month. I’ve also been on two day-long workshops which have given me a lot of inspiration. 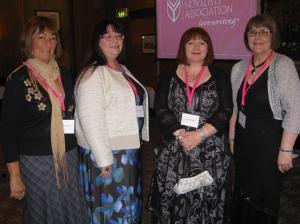 Onwards and upwards in March!